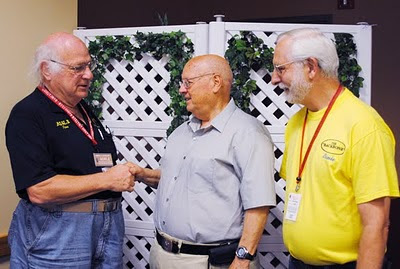 Jim AI4LE congratulates Richard White as Ernie KG4YNI looks on. Richard hails from Poinciana Florida. He traveled quite a distance to take the test, and it was well worth the effort. He earned his Technician this time. After the testing, Richard shared with us his next goal, General. You did good Richard! All of us at LARC wish you the best.

Richard is retired Air Force. In a brief conversation after the test he revealed that he was once a crew member of a B58 Hustler that broke mach, 2 at 60,000 feet AGL. The Hustler was a delta winged ship designed in the fifties. Impressive then and now. The ionosphere at the speed of light is the target now!