Only a few weeks ago Bill KK4BMJ, Goff KK4EBS, and Jon KK4EBR got their tickets to perform on the air. All three were back, driven by personal interest in ham radio, for upgrades. Goff and Jon earned upgrades to General while Carter made extra with nearly a perfect score. 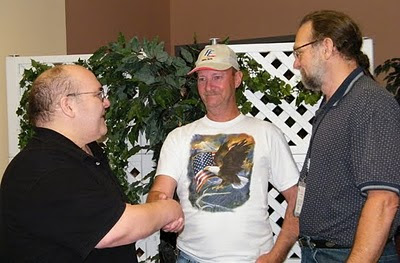 Pictured above, Bill KJ4IAI looks on while Goff and Carter congratulate each other. Also present, but not shown were Ernie KG4YNI, Jon KK4EBR, and Bill KI4ZMV.