Badges
All new members get a name tag. If your wife is a ham, or would occasionally like to attend meetings, and would like a badge, we will have one made for her as well. In the picture below, Rich is handing a badge to new club member, Sam Shaver. 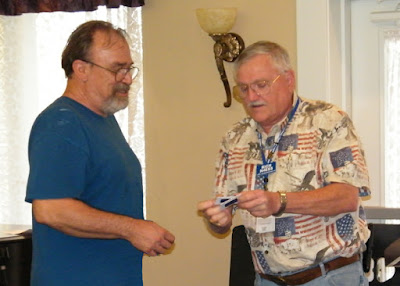 John Leahy On QRP
We had two presenters this evening. The first, John Leahy, spoke on his approach to QRP. John demonstrated his QRP Go Kit, which included radio, tuner, power/swr meter, battery, a rather unique pair of antennas, and an unusual Morse Code key. 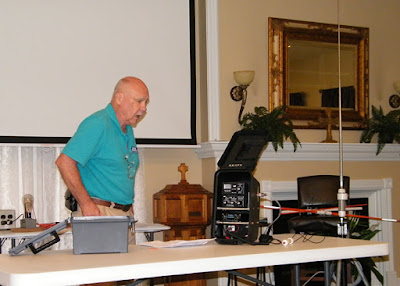 The power source for John’s radio is a small emergency battery located at the bottom this innovative adaptation of an ammo case. 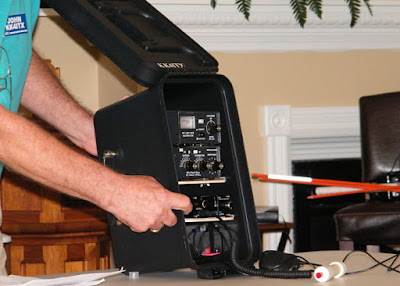 John uses three different techniques for matching the the impedance of the various antennas he uses, to his radio’s impedance. There is an MFJ tuner inside the case. This is used for a simple dipole and for for some experimental antennas like the loop he demonstrated. The vertical John demoed has a built in adjustable loading coil at its base. I works much like the motorized versions found on many mobile rigs, except it is manual. The third matching device is the matching transformer shown below. This is used in combination with an end-fed long wire antenna. You can find instructions for winding one of these at http://www.zaarc.org/Endfed6_40.pdf 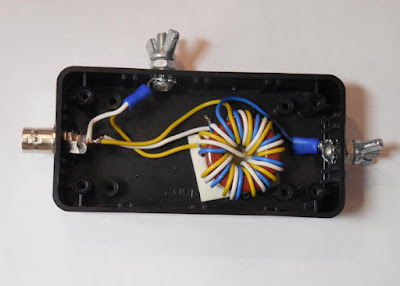 It might be worth you time to give John’s site a visit. It contains lots of interesting information.

Don Jeerings On Electromagnitism
Our second speaker of the evening was Don Jeerings. Don needs no introduction. Tonight’s demonstration was the magnetic field generated around a conductor. The thing that made Don’s demonstration unique is that he chose a carbon filament light bulb as his conductor. By placing a strong magnet near the current carrying filament, he was able to demonstrate the interaction between the magnetic field of the filament, and a strong external magnet. Sure enough, when the magnet was brought close to the lit bulb, the filament started to oscillate at 60 cycles per second. 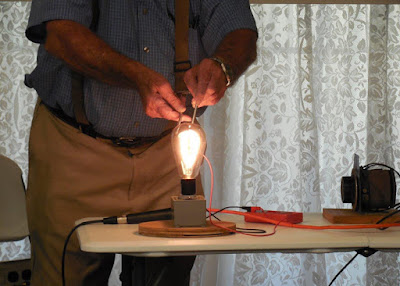 As will all Don’s presentations, they are great photo ops. Here George is recording for posterity the the effects of electromagnetism in action. 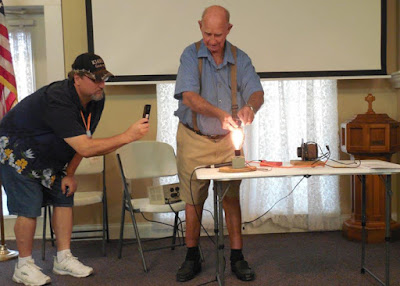