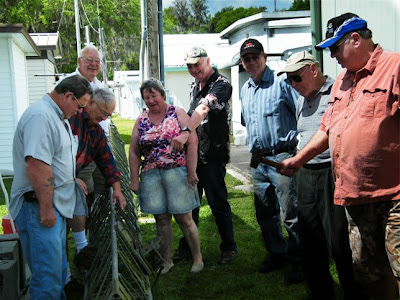 When Glen Culler W4JGC needed some help moving his newly acquired antenna to its new home, he put out the word, and his friends showed up to help. Most are regulars at the Tuesday breakfast get-togethers at the BrunchBox. Many hands make light the work.

From left to right are Glen Minnich WB4KW, Al KA2BVC, Glen Culler whose tower we all came to move, Rick’s wife Phyllis N4HVB, and Rick ND4Z, Bob K2EUH, Ed K9RWP, and last but not least Jesse the hammer K9GO.

Not shown but also present were Bill KI4ZMV, and Lois, who put on quite a fare for all those who came to help.