Radio interference is a very sensitive issue for anyone having to deal with it. When the club got an email from Cecil Erdly asking for help with a radio interference problem, Ernie KG4YNI was first to respond. He offered several suggestions, and by the time Bill KI4ZMV contacted him, Cecil he had the problem narrowed down to one specific street lamp, and even supplied the light’s pole number.

Fortunately for hams, and non-hams alike, we have Mark KJ4IRD. Mark works for the Lakeland Electric Company. One of his responsibilities is tracking down and remediating electrical interference that may be related to the power company. From the information I relayed to him by phone, he was able to dispatch a crew to the area and replace the offending lamp in a matter of hours. Great work Mark! Problem solved.

I was very curious why Cecil would contact the Lakeland Amateur Radio Club for help with radio interference. Cecil was kind enough to come to our meeting and share his story with us. He explained that when he was a youngster, he made the acquaintance of an older gentleman on his paper route. This man happened to be a ham radio operator, and like most hams, was happy to take the time to explain what the hobby is all about. Cecil was impressed with the fact that this man was knowledgeable enough to build his own radios. This must have made quite an impression on Cecil, because fifty years later, when he asked himself who would know about radio interference, ham radio operators came to mind first. For a Radio Club whose mission is Service, Education, and Comradary, I can’t think of a better complement. 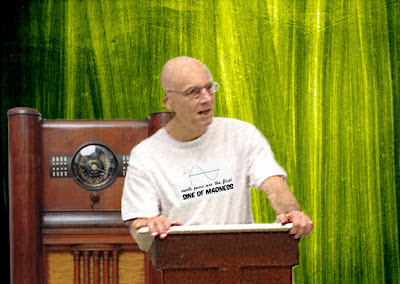 Cecil is pictured here with an image of the radio he used to listen to as a child. Cecil, you are welcome to drop by any time. ﻿
The main speaker for this evening was Chet AB4XK, who delivered his well-polished presentation on decibels. He included many historical facts, and some humorous bending of others. Did young Alexander’s dad really call him young Aleck as a toddler and later smart Aleck as a teen? 🙂

Chet’s presentation was not only historical. It also covered the utility as well as the math associated with decibels. Some knowledge of logarithms is required to fully understand the concept and Chet was kind enough to review those dreaded logarithms we had to deal with in high school. These days we find logs on calculators, but back then, the closest thing to a calculator was a slide rule.

During his presentation Chet made clear the importance of logarithms when it comes to representing large numbers. It is a lot easier to represent something as 26, than as the number 1 with 26 zeros after it. In addition to their ability to represent large numbers, logarithms are particularly useful for representing the intensity of sounds and brightness of light. The human ear and eye respond logarithmically. That is, the log of the intensity of sounds and brightness of levels of light appear to us more evenly spaced. It is the way we are built. Our sensors are not linear.

Keep in mind that decibels are logs of power ratios, or Power out divided by power in. Chet made clear that 3 db, or 0.3 bells represents a doubling or halving of power or intensity. Photo buffs, familiar with adjustable f-stops and shutter speeds deal with this all the time. It turns out that f-stops represent log intensity changes of 0.3. If you halve the exposure time, you must open the lens one stop to maintain the same exposure. If you double the exposure time, you must close the lens down one stop.

One might be tempted to suggest that S-units are in increments of 3 decibels also, but we would be wrong if we did. In terms of power, each S-unit represents a 6 db, not 3db power change. (There are reasons for this. It is on the extra exam.)

Chet’s presentation contained many excellent visuals. One in particular was a chart depicting the relationship between frequency and reactance. Though mostly obsolete, now that we have calculators and spreadsheets, it is still helpful for getting a ballpark idea of the levels of capacitance and inductance needed to achieve resonance at a given frequency. Get your copy here. 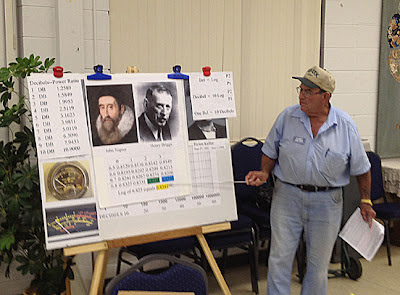 Here is Chet, delivering his presentation to a captivated audience, which included three teen hams who now have an even better understanding of why we need to study all that math in school. It is so we can become better ham radio operators! 🙂