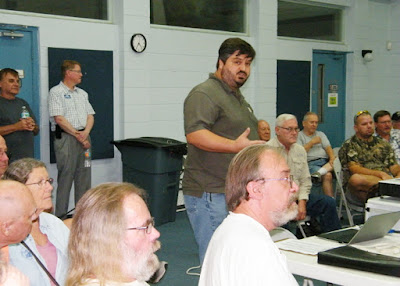 Speaking to a captivated audience, Drew presented the the history and theory behind satellite communication. Later the group retired to the outdoors where he put theory into practice. In the space of a few minutes he made a contact with a ham in Texas.Then, wishing to share the fun Drew got Liam KM4STS to participate. 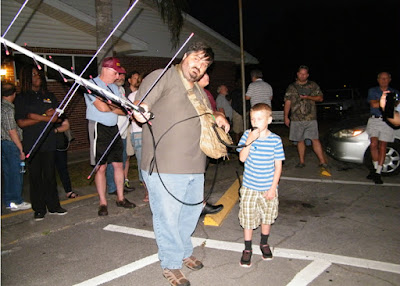 Liam KM4STS makes the call while Drew aims the antenna. 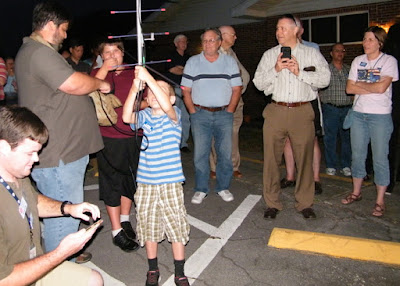 Liam takes his turn holding the antenna while
Tyler takes the mic,
and Liam’s mom, dad and grandpa, all hams, look on.

They make it look so simple. Like child’s play. 🙂

In his presentation Drew discussed the history, theory, and practice of ham radio satellite communication. It was made clear that it doesn’t take much to get started in satellite radio. An antenna and a dual band HT will do. Two dual bands are better.
For those interested, the Internet is a great place to start learning about this phase of ham radio. Besides the radio you will need a directional antenna and some idea of where the satellite you are trying to reach is at any moment. Antennas can be purchased, or if you prefer, you can build your own. The two popular brands are the Elk and the Arrow. Both are priced in the $145 dollar range. This is a lot of money if you just want to experiment to see if you might be interested in this phase of the hobby. For the cost conscious, the tape measure beam optimized for direction finding might be just the ticket.
http://theleggios.net/wb2hol/projects/rdf/tape_bm.htm

I built one of these for fox hunting, but I am told it will work with satellites as well. You can’t beat the price.

So assuming you have the radio/s and a suitable antenna, how do you determine the direction to point the antenna and the frequency to set your radio?
The pointing solution comes from software programs which use unclassified information collected by NORAD and passed onto NASA. From this data, these programs predict the position of the satellites at any one time. Using software like this lets you know when the satellite is in range.
Most of us are familiar with repeaters and how they rebroadcast an incoming signal either above or below the received frequency. However, with satellites, the operation is somewhat different. Most satellite transponders, repeat what they hear, the up-link signal, on a another band, the down-link signal. There is another wrinkle. Because the satellite is moving it will exhibit a Doppler shift. This means that as the satellite rises its frequency will appear to be higher than published, and then once it has reached its peak, will become progressively lower than published. This shift is more pronounced on the higher frequencies.
Mode describes the up-link and down-link bands used. For example Mode V/U means the up-link is on VHF, and the down-link on UHF. Mode U/V would be the reverse.
Schedule is another important piece of information to have. Satellites are not always on. However, schedules are published for each. It is a good idea to check ahead of time.
This link will get you started:
http://www.amsat.org/

Click on the above link. This will take you to the AMSAT site.

Start by clicking on the drop down menu Satellite Info
Scroll down to Communications Satellites
Pick one, ie AO-85
Read about its history and discover the frequencies it operates on.
Go back to the drop down menu Satellite Info
This time selectPass Predictions
Select the Satellite of interest AO-85
Enter your location grid square or latitude and longitude
Click on Predict and a table similar to the following will appear. 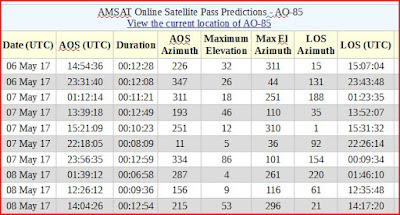 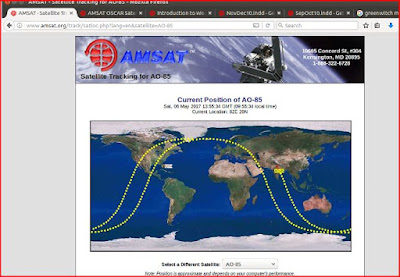 If this information gets you interested in satellite communications, it has done its job. Several of our club members are heavily involved with this mode of operation. Two in particular are Matthew KK4FEM and Rich N4ESS. I am sure they would be happy to share their experiences with you.

Hi bill,
I read your blog post. If I may offer a few suggestions…
You don’t have to pay $145 for an arrow. The least expensive one they offer will work fine with 2 radios (it doesn’t include a duplexer) for $90. Also, if you purchase any of these things through the amsat store, they get a percentage of the sales to support operating and building more satellites.
http://store.amsat.org/catalog/product_info.php?products_id=142&osCsid=vjvt1e817ti22dqmg7olgvu2r0
We also highly recommend AGAINST using tape measure Yagis for sats. These may have worked fine in the past for birds with stronger down links, but with the current fleet of sats people will just be frustrated trying to use them. They don’t have enough gain, especially on 70cm to allow people to copy the downlink effectively.
A much better alternative if folks don’t want to shell out the cash for an Arrow or Elk is the WA5VJB “cheap yagi” that drew mentioned during his presentation. This can be built using scrap wood and common house wire for almost no money. Here is the info.
http://www.wa5vjb.com/references/Cheap%20Antennas-LEOs.pdf
73
– Matthew kk4fem