Matthew, Rich, Bill, and John were guests at Buddy Morgan’s Weak Signal Society Meeting. The meeting was held Saturday, November 11. All toll, there were 21 members and guests present.

Weak signal as I understand it is a subset of amateur radio that deals with signal transmission on frequencies VHF and higher over large distances. Large distances may be 400 miles. Weak signal differs from QRP which may reach another station thousands of miles away using 5 watts power compared to a thousand watt signal at higher frequencies reaching another station only about a quarter of that distance. The difference is in the transmission frequency, not the power used to transmit. For sure, both signals may be weak when they arrive, but only the VHF and higher frequencies qualify as weak signal contacts. 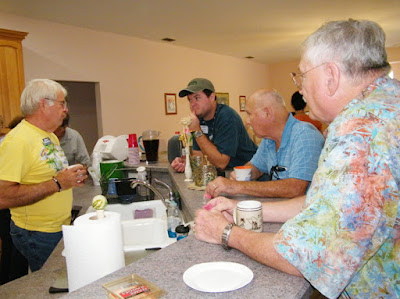 Attendees discuss radio before the meeting. Left to right, Buddy, Matthew, John, and Rich. Bill, not shown, was taking the picture. 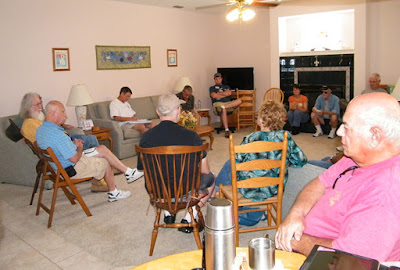 Twenty-one in all attended.This is a very specialized group. 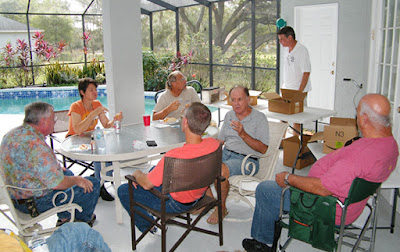 After the meeting attendees relax by the pool, and enjoy lunch, complements of the Morgans. 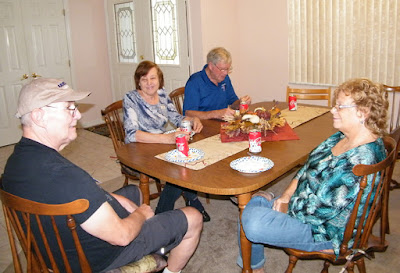 The overflow lunch crowd in the dinning room, including our hostess Lydia Morgan. Lydia is left of center. (This is not intended to be a political statement. 🙂 ) 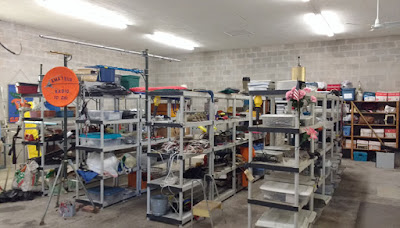 After the meeting, Buddy gave us a tour of his shop. Some of his assemblies are over 20 feet in length and contain several dozen elements. Buddy’s shop is large enough to easily hold two Greyhound Buses. In fact, that’s what the previous owner built it for.

Towers are very important for this type of radio, and Buddy has two.