Not pictured is John McCullough, KN4FBD who passed his General. John had to leave early, but we do have a picture of him on file. Click here 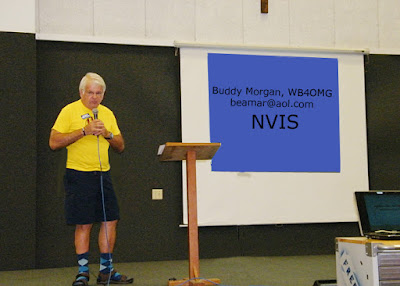 Our guest speaker for this evening was Buddy Morgan, WB4OMG. His topic NVIS or Near Vertical Incidence Skywave, antennas and propagation.

NVIS, is a radio-wave propagation path that provides usable signals in the range between  30–400 miles. The radio waves travel near-vertically upwards into the ionosphere, where they are refracted back down and can be received within a circular region up to 400 miles from the transmitter. Frequency is critical. If too high refraction fails to occur, and if it is too low, absorption in the ionospheric may reduce the signal strength.

The most reliable frequencies for NVIS communications are between 1.8 MHz and 8 MHz. Above 8 MHz, the probability of success begins to decrease, dropping to near zero at 30 MHz.

Standing in for Matthew who was away on business, Bob Doherty made the announcement that the club now has 107 members! Great presentations are one of the benefits of LARC membership. We appreciate all the hard work that goes into presentations like the one given by Buddy.

Another first for the club was that this evening’s presentation was live streamed over the Internet as an experiment. The plan is to make this a regular procedure so that those who find it difficult to make it to the meeting will still be able to participate from home.