One New Tech and One New Extra

First the highlights. We have a new Vice President, Mike Shreve. In addition, we have three new board members, Glenn Culler, Aimee Holzer, and Dave Lafave. Bob Doherty stepped down as VP to take care of family matters. We wish him well, and his grandson a speedy recovery. The club benefited greatly by his organizational skills and his ability to line up great speakers for our meetings. Al Sheppard has also stepped down as active board member. He has relocated to Naples Florida to be closer to his son. We will miss his quick wit, kind words, and helpful direction.

Our Main Presenter For The Evening James Stewart
On Winlink

Jim did a masterful job at presenting a powerful tool that should be on every hams tool belt. If all local communication fails Winlink will enable you to reach anyone in the world with internet access. Winlink allows you to jump out of the affected area to reach a station that will forward your message. 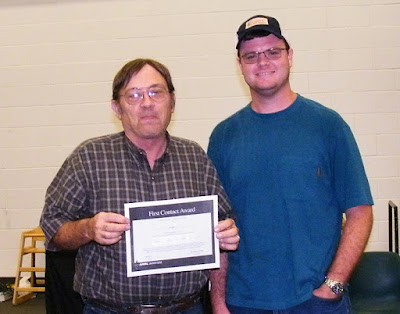 Attendees Who Signed In